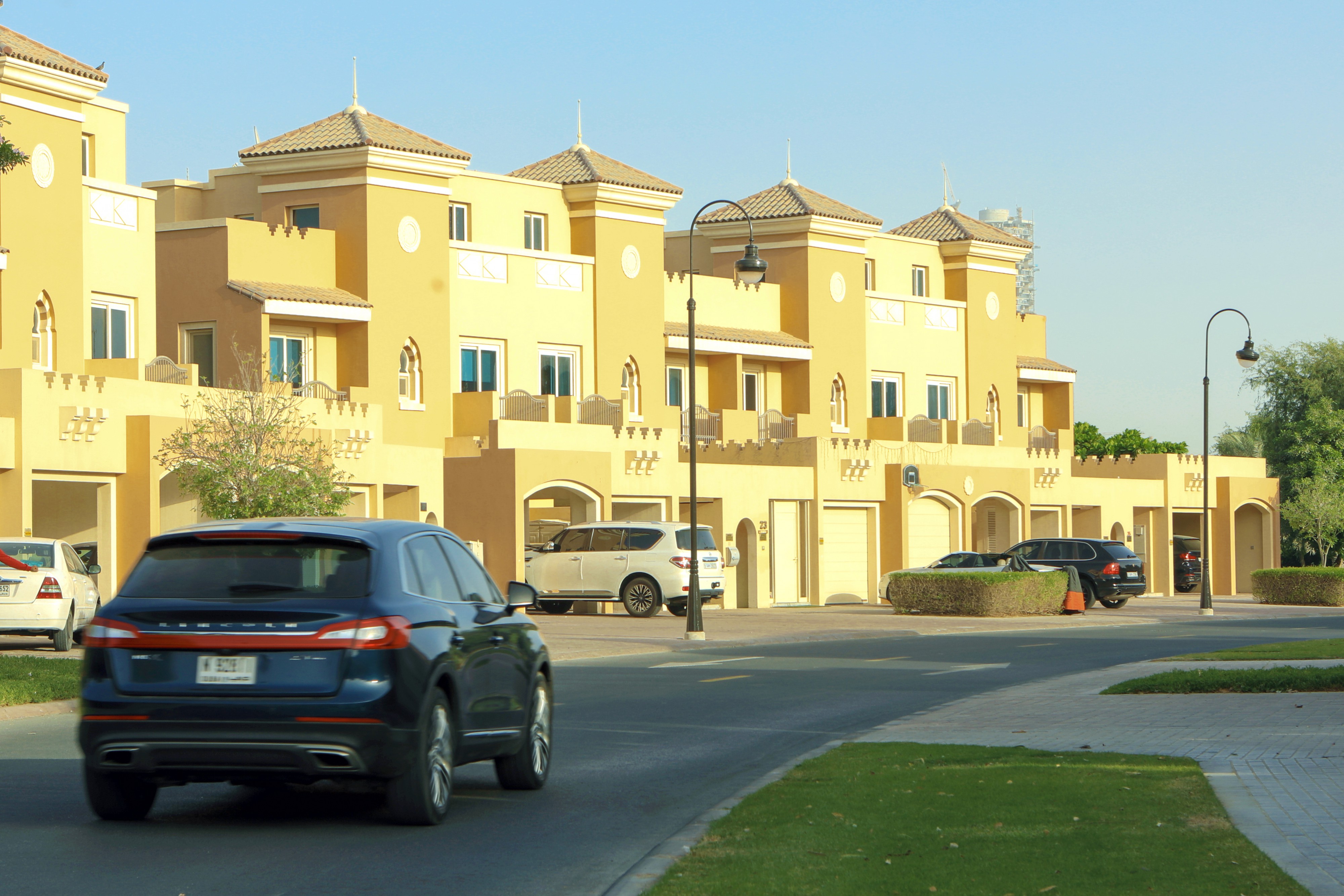 Heights of happiness: why these residents love their community 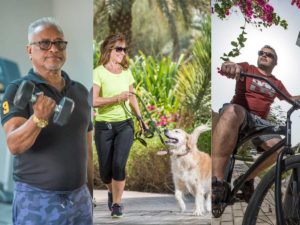 Designed around a golf lover’s haven on the immaculate fairways of the prestigious Els Club golf course, Victory Heights is a gated community of nine villages that is home to Spanish-style villas, cycling paths, running tracks and community centres set amidst rolling green spaces.

Three long-time residents from different walks of life tell us why they wouldn’t trade life in Victory Heights for anywhere else.

“Working out is really important for me” 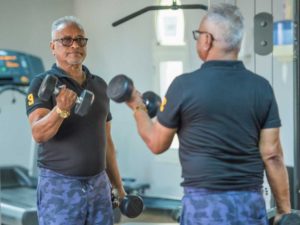 When Subhas Cherian first visited Victory Heights to look at some villas, he was pulled over. “We were tailed by security and questioned about where we were going,” he says, adding that the community has the best security he’s ever seen in Dubai.

Subhas should know, being an owner of not one but two villas in Victory Heights. He and his wife first lived in an Oliva townhouse. “We enjoyed living in the community so much that we bought and moved into another property, a Novelia B villa.” The townhouse is now being rented.

As a 67-year-old who has high blood sugar, Subhas is grateful for the fitness amenities on his doorstep – and he tries to make full use of them. Every other day, he walks or jogs down the Victory Heights running track, pausing to use the bodyweight-resistance exercise equipment along the way. “There are lots of green spaces and benches to relax and stretch out on too.” At the gym, he’ll do some weights and a bit of treadmill if he has the energy.

Being the chairman and CFO of his own company, Option 1 Events, Subhas often has to stay back late at the office, which may impact his ability to wake up early for the morning fitness routine. Living in a secure gated community with well-lit jogging paths, Subhas can step out for a jog no matter how late it is.

By Subhas’ estimate, 30 to 40 per cent of Victory Heights residents work out in their community. “If you’re here at 6am, you’ll see a lot of people who are quite old going on walks. After that, you’ll see youngsters cycling and going to the gym.

“This is a diverse, cosmopolitan community. You get Europeans, Indians, Koreans, Chinese, Japanese… it’s a rare kind of mix in Dubai. Yet, we don’t feel different to one another. It’s all one family.” Residents organise children’s events for Halloween and Easter, announce garage sales and recommend maids and nannies through various community Facebook pages.

“My children have grown up here” 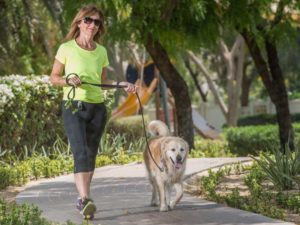 “For me, Victory Heights is the best form of the desert with green space around,” says Linda Muldoon. A resident in the community since its inception nearly a decade ago, Linda is happy to wax lyrical about its best features: “With the wide-open space and properties not being on top of each other, you don’t feel like you’re in a villa community in many of the areas. I also like the fact that it is very small. There’s only around 1,000 villas so it’s much more intimate than other communities I’ve stayed in. It’s very friendly, you know most of the neighbours.”

The director of Urban Nest, Linda’s real estate expertise gives her a keener insight into what sets Victory Heights apart from villa communities around Dubai than most residents.

Her 16-year-old son and 14-year-old daughter have grown up in the community, and she acknowledges they were lucky to do so. “When they were younger, they’d get on their bikes and go to the park. We’d go to The Els Club for lunch in the afternoon – The Big Easy’s steak is to die for.”

She’s also looking forward to the upcoming leisure enhancements at The Els Club, which include a new gym and swimming pool.

Often spotted on morning walks with Bella, her seven-year-old Golden Retriever, Linda is well-known around the community. “Because I’ve been here so long, work in real estate and specialise in the community, I’m actively involved helping homeowners with all of their approvals, such as for modifications, swimming pools and extensions.” She also runs property clinics and presentations at owners’ houses.

Linda has worked extensively with the Owners’ Association, which hosts a number of events on a quarterly basis. “We ran a Christmas Fair in The Els Club last year. There were a number of stalls set up, a gingerbread house, children doing sprinkles, Christmas tree pictures and games such as guess the number of sweets in Santa’s sack.” More recently, she held an Easter egg hunt at one of her property clinics.

“A good place to bond with my son” 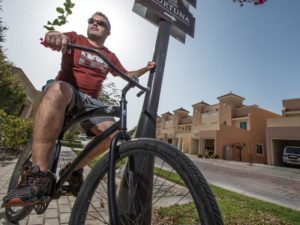 Mark Armand, a 43-year-old pilot with a major UAE-based airline and single father, lives in a Fortuna townhouse with his 16-year-old son and 70-year-old mum. “The first thing I love about Victory Heights is the privacy,” says Mark. “The second is that the greenery reminds me of Guadalajara, Mexico, where I grew up.

The pilot, who spends an average four to five days a month outside the country, appreciates the opportunities afforded to his son and mum, not only in Victory Heights but also in the wider Sports City area. “It’s really convenient for my son, as he plays American football at Sports Village. My mum likes going to the community gym – which is only a block away from our house – and walking the dogs around the park in the afternoon.”

Being a single dad, Mark makes an effort to spend as much time at home as possible. “I do a lot of turnarounds – short flights where I can go out and return home the same day.” To deal with flight-related fatigue, he’ll cycle around the community – a knee problem rules out running for him – to expend a bit of energy to tackle jet lag. “I like that I don’t need to drive over to Qudra for a good bike ride. People in Victory Heights respect cyclists.”

When he’s not in the air, Mark likes to start his day by walking his dogs around one of the nearby parks before coming home to wash the cars and do a few chores. His family likes to eat fresh bread, so he might pick some up from the nearby City Centre Me’aisem. “After my son comes home from school, we’ll have lunch together. In the afternoon I’ll chill at home because it’s quite warm right now. In the evening I’ll walk my dogs again, go cycling and come back for dinner. We love doing barbecues at home in the garden.

One more chance to buy

Marbella Village is the ninth and final community to be developed in Victory Heights and is ideal for those looking to live in a tranquil environment. Limited to just 96 townhouses, it blends the best of Spanish architectural themes with modern design to create unique living spaces.

In terms of construction progress, grading works have already been completed and infrastructure works are in progress. The construction of townhouse buildings is expected to commence next month.

Homes at Marbella Village offer attractive post-handover payment plans of up to nine years. For more information on how to become part of one of Dubai’s most desirable communities, visit www.vh.ae.